the Global Centre for the Responsibility to Protect

and the International Coalition for the Responsibility to Protect
cordially invite you to a panel discussion entitled:

Reflecting upon over 70 years of the Genocide Convention:
Challenges and ways forward in atrocity prevention

In December 2018, we marked two major achievements of the twentieth century: the adoption of the Convention on the Prevention and Punishment of the Crime of Genocide and the adoption of the Universal Declaration of Human Rights. The international community agreed on these groundbreaking documents with a view to “never again” allow atrocities as those committed against the European Jews and other groups prior and during the Second World War. Both documents reflect that to prevent genocide and other atrocities, human rights must be safeguarded and protected.

More than 70 years on, genocide and other atrocities are still committed in many parts of the world and remind us that no society is immune. Much remains to be done to prevent these crimes effectively and for this reason it is important to also identify success stories and share good practices. Moreover, it is necessary to reframe prevention from urgent crisis management to sustainable early and permanent prevention, which requires solid national policies and mechanisms.

Each year during the month of April, many people around the world dedicate time for remembrance and commemoration for the victims of genocide in observation of “Genocide Awareness and Prevention Month”.

This event will provide an opportunity for governments, civil society organizations and practitioners to take stock of achievements and failures in atrocity prevention in the 70 years since the adoption of the Genocide Convention and explore recommendations for better prevention in the future. Drawing on lessons learned, the expert panel will discuss measures the atrocity prevention community can and should be taking to better protect vulnerable populations from these heinous crimes. Emphasis will be placed on how the Genocide Convention has fortified action at the domestic level and how to build upon and learn from past experiences. The event is organized with the support of the GAAMAC Support Office. The co-hosts are members of the GAAMAC Steering Group.

The panel will be chaired by Ms. Mô Bleeker, GAAMAC Chair and Swiss Special Envoy for Dealing with the Past and Prevention of Atrocities. It will be followed by an interactive discussion with all participants.

Please join the panelists and fellow participants for coffee after the event! 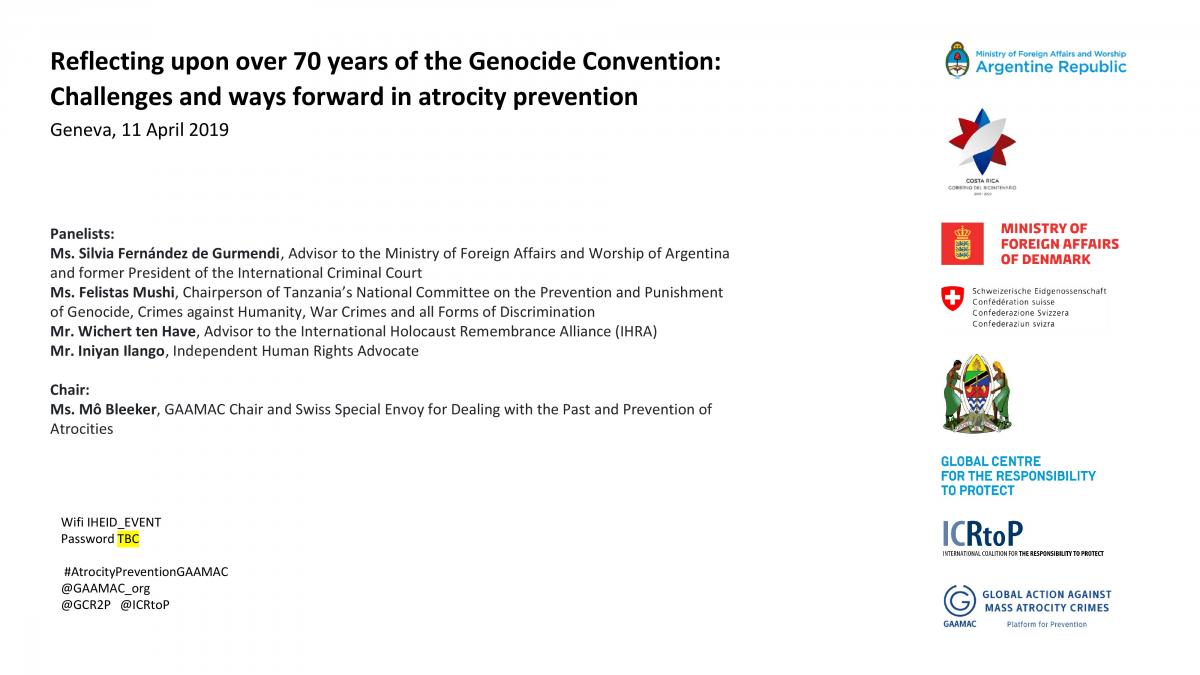